UGH. After such a tiring day yesterday, we had to wake up early. The good news is that we slept well, and woke up feeling pretty refreshed.

Today marked our first foray into the Rome Metro as well. Previous to this, we had just been riding the bus and tram. Surprisingly (or maybe not, now that I think on it), Rome only has two underground lines. It is such a large city that I was surprised that they did not have more, yet it is so old and has so many layers that I’m not surprised they haven’t built more. It seems that one cannot go ten feet without finding something of archaeological value. I can just imagine how they would start to dig, but then have to stop to excavate something, thus pushing the project timeline back. Interestingly, the city is in the midst of digging a new line, Linea C. The dig for it is going RIGHT NEXT TO the Colosseum and Forum, which boggles my mind, as this is truly in the oldest part of the city. Wouldn’t the vibrations from all the digging cause more potential collapse? I’m sure they have engineers and archaeologists who can certify the dig is okay to move forward, but it was just surprising to see.

So first impressions: the Metro in Rome is SO not as nice as the Tube in London. I mean, it doesn’t even compare. The Paris Metro is even better, and I didn’t like that one because of how confusing it was. This one is more simple – just two lines as I mentioned – but it is not as well maintained. The English love their Tube; they even have a whole museum and gift shop devoted to it, so it shows. The Roman Metro? No.

Anyway, we rode the line and navigated our way with two Australian ladies who were also making their first trip into the Roman Metro and also going to the Vatican. They were here for their first trip, too, so we compared places we’d seen. Thanks, again, to Google Maps, we were able to find our way to our meeting point for our tours. We arrived early enough that Thing 2 and I were able to stop in to the little cafe right in front of the entrance to the Vatican museums, the Caffé Vatican, and get a pastry and something to drink. Thing 2 got a chocolate muffin and a donut; I got some sort of a pastry with chocolatey goodness inside.

Our guide was a gentleman named Emanuele, and he was an art historian who really knew his stuff. He took us through the Vatican Museums and explained everything we saw. We started off in the picture gallery; all of the art here was arranged by date from the earliest Christian art through to the Baroque period. We also saw an amazing room full of enormous tapestries. Not only were they large, but also they had gold threads woven into them to provide richness and a luminous quality. He also showed us lots of different sculptures and early Etruscan funerary urns. We also got to see the Bramante Staircase, which was actually a ramp. 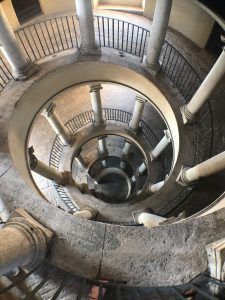 It was called a staircase, but it was a ramp because it enabled the Pope to travel up and down it on a horse. Not everyone gets to see this, so we felt really special. From there it started getting more crowded as we traveled through the rest of the rooms in the old Papal Palace. My favorite room was one of the Raphael Rooms, the Stanza della Segnatura, because this room contains Raphael’s painting, The School of Athens. 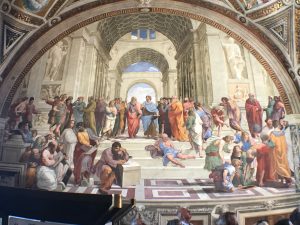 This painting is in many history books, including the one that I use with my own students. So, seeing it in person was WAY cool. 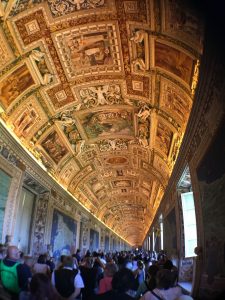 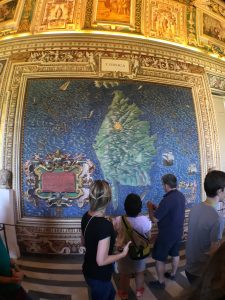 Along both long walls are a series of maps which showed all the regions of Italy; there are twenty maps on each wall. So, all regions of Italy were represented, plus islands such as Corsica and Sicily. (Corsica belonged to Italy at that time; it is now French.) Each map is nearly square (15 by 16 ft.) and includes details such as cities and rivers. Above each map is a painting that depicts some miracle that took place in the map below it. Every inch of the gallery is decorated; the ceiling is magnificent. I have to admit that, at first, I thought we were moving into the Sistine Chapel. (It was that magnificent.)

The Sistine Chapel was nearly our last stop. It was amazing. It was supposed to be silent inside, but there were so many people inside that the murmuring got loud. Occasionally, the museum guards would call out, “Silencio!” We also needed to ensure that we had our shoulders covered and our knees. Like the Gallery of Maps, every inch of the Sistine Chapel is decorated. The ceiling, of course, was magnificent. The door that we entered was actually the door behind the altar. So, we entered, turned around, and then saw Michelangelo’s Last Judgment. All told, we spent about 15 minutes in there, taking it all in, noting some of the details that Mr. Emanuele told us about before we entered. It was forbidden to take pictures, otherwise I would have posted some here.

Lastly, we visited St. Peter’s Basilica. It is almost overwhelming how large it is. According to our guide, sixty thousand people can fit inside. The main nave of the church is huge; along the side are two levels of statues. The statues at the first level are twelve feet tall; the statues at the second level are 15 feet tall. The Latin writing near the ceiling of the basilica is nine feet tall. The chapels off to either side of the nave are immense. One was dedicated to Pope Saint John Paul II. Several people were inside his chapel sitting in prayer or silent reflection. In another part of the church, one could go to Confession. Priests were available to hear confessions in several different languages. Thing 2 and I opted to visit the grottoes where many of the popes are interred. Saint Pope John Paul II was in the grottoes until he was elevated to the sainthood; now he is interred in the chapel devoted to him off the main nave. We also had a chance to see Michelangelo’s Pietá. 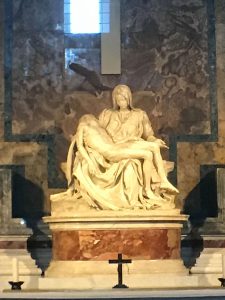 This was a very crowded part of the basilica, because so many people wanted to see it. It is behind glass, as someone in the 1970’s took a hammer to it. It is restored, but must be protected now.

Before we left St. Peter’s Basilica and Square, and the Vatican in general, we took an opportunity to mail some postcards home from the Vatican. They have their own stamps and postal system – plus their own radio tower. 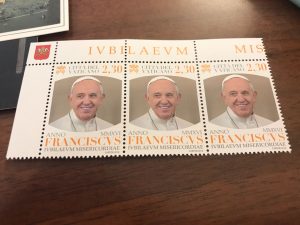 Hot and more than a little weary, Thing 2 and I walked to a little “pizza on the go” place a few blocks from the Vatican. It was soooooo good. The restaurant had all sorts of personal-sized pizzas made up on focaccia bread; you chose the one you wanted and then put it in the oven for a few minutes and brought it to you. 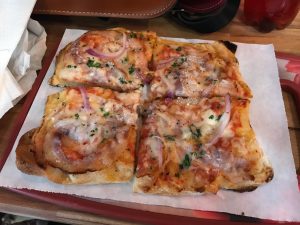 It hit the spot after a long morning of walking around. At this point, it was our plan to visit the Parthenon and then visit Castel Sant’Angelo. But we were over-ambitious and underestimated how tired we were. Plus, Castel Sant’Angelo was very close to the Vatican, so we headed over there lazily and got our tickets for our guided tour at 4 p.m. I also took some great shots of the Tiber River from the bridge that is right out in front of the fortress.

The Castel Sant’Angelo is similar to the Tower of London. It is an old medieval fortress, and actually it was originally built during the time of Emperor Hadrian to house his cremated remains. 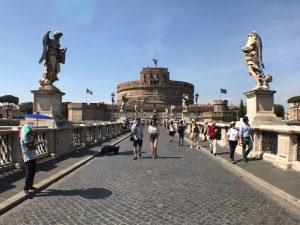 Once Rome became Christian, they got rid of the remains and used the complex as a fortress and prison. It had a nice defensive position right on the river and on the hill. They even built a “secret” two-story passageway from it to the Vatican itself (which we walked in). Not a whole lot of people get to walk in there, either, so we felt even more special. 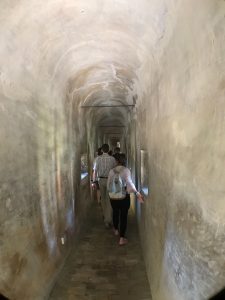 When Rome was under siege during the 1500s, the current pope actually escaped through the secret passage way and stayed in the Castel Sant’Angelo for six months until the siege was lifted. So, one of the things we also got to see on our guided tour was the pope’s bathtub! 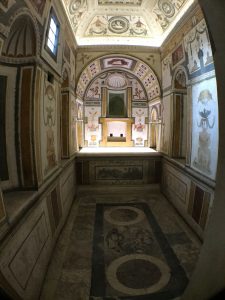 Yep, the picture above is where he cleaned off. We also visited the dungeons and saw the storerooms where they stocked their provisions (like olive oil and wine).

By the time this tour was over Thing 2 and I had serious foot problems. I had developed blisters on my feet from so much walking and Thing 2 was just plain tired. We used Google Maps to find our way back to the hotel. One of the things that we passed on the way home was a water fountain. They’re actually all over the city of Rome and not what one would normally think of when thinking of a drinking fountain. But they’re not a fountain at Disneyland either. Sometimes they’re decorative, and other times not. But there is a constant, running stream of water coming out of these fountains. People walk up to them and put some in their hands to wash their face or wash their hands. 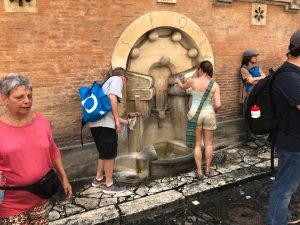 Others fill up their water bottles, like we did. (If you are a tourist, we quickly found out you only need to buy a water once, and then the rest of the time, fill up your bottle with water from the fountain.) The water is totally fresh and COLD, so it is a welcome treat on a hot Roman day. They had one at the Forum, too. And our guide at the Forum (more about that in the next post) told us that they’re constantly running, reliable and fresh, come from underground aquifers (some of the same that the Romans tapped into themselves so long ago), and is so plentiful that no one in Rome has a water bill. There was one such fountain right across the street from our hotel.

I cannot remember what we had for dinner. I think it was gelato again? 😀

For even more photos from our day, including some seen in the above post, visit this link.