In an earlier post, I wrote about the colorful goodness that is the rainbow sprinkle. Rainbow sprinkles enhance the beauty and flavor of any dessert or treat: donuts, frozen yogurts, milkshakes (my favorite flavor is peppermint), birthday cakes, and . . . cookies.

Tonight, I went to an Italian deli in Anaheim to get some sandwich fixings, meatballs, sauce, and pasta. They’re an awesome market and I’ve been going there for years. They recently remodeled, and now there is an enticing dessert case near the front where I get bread and pay for my purchases. What was on display? I’m sure the dessert cannolis were delicious. But there was only one thing that caught my eye — melt-in-one’s-mouth sugar cookies topped with rainbow sprinkles! 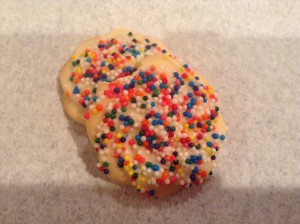 Yummy! Of course I had some after my dinner as a treat. I think I’ll go have another now. Happy Friday!

. . . so I’ll play hooky from grading and doing school-related tasks to make a posting about some random things.

First, I hope everyone’s vacation was relaxing! It is so NICE not to have to live according to a bell. It is so NICE to get to wake up at 7:30, get Mr. T some breakfast, and then go right back upstairs to read in bed. And watch as many French movies as I want on Netflix. And binge-watch all of this upcoming season’s episodes of Downton Abbey before anyone else watches them on U. S. television. (I promise I won’t tell what happens!) And . . . vacations are so NICE!

Alright, so next on my random-thoughts post, can I just say how NICE it is to go out to dinner? Any time I don’t have to think of what to make for dinner nor have to actually cook it? Well, that’s just NICE! 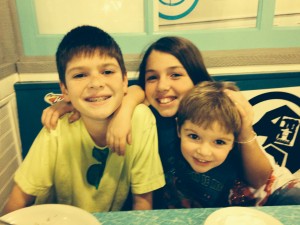 We went to Wahoo’s tonight. It’s cheap and quick, but not necessarily fast. There’s Thing 1, Thing 2, and Mr. T acting silly for the camera after we got done eating. We always seem to get the same thing: an appetizer of cheese nachos with guacamole and sour cream on the side; bean and cheese burritos for the kids; a one-mild-chicken-taco-with-black-beans-and-white-rice dinner for me, and something for Mr. Rovira. He’s more adventurous than I am. I always get the SAME THING every time we go. He changes things up a bit. This is the same for every restaurant we go to. I order the SAME THING. No matter where we go, I have my favorites on every menu and I do not deviate. That’s just me. I know what makes me happy, and I do not want to try something new, only to find that I didn’t like it, leading to disappointment. That’s not NICE!

Next, it’s candy heart time again! Just like rainbow sprinkles (see a previous post on this), I *LOVE* candy hearts. I don’t know why. Perhaps because they are multi-colored just like candy hearts are? (And here’s a fun fact: did you know that in other parts of the country, the sprinkles are called “jimmies”? You learn something new every day!) In any case, I am very particular about which brand I prefer. As far as I am concerned, THE brand to buy is Brachs. Do NOT buy the Sweethearts brand. They are tart. Candy hearts should not taste like raspberries or green apples. No no no no no no no. I bought two packages tonight at Ralph’s on the way home from Wahoo’s. We’ve already opened up and dipped into one of them at home. Yep, that’s how we roll. 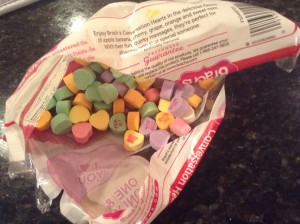 Lastly, did you know I get to go to London this summer? I’m THRILLED! Thing 1 and I are going to go. It is a long story why just he and I are going, but we are. Over vacation, we went to the post office to file the paperwork to get our passports. I’ve never had a passport before. It came in the mail today! It is so cool to have one. I took a picture of myself with my passport: 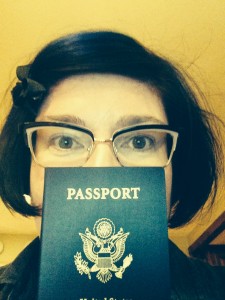 Interspersed among the pages of the passport are quotes from important American documents, such as the Declaration of Independence, the Preamble to the Constitution, and the “Star Spangled Banner,” our national anthem. I’m excited to see some of the history-related things I’ve been talking to students about for so long. I get to see them in person! Thing 1 got a London guidebook for Christmas, and we’ve been starting to make a list of things we definitely want to see while we are there. On the top of my list is the Tower of London, the British Museum, Buckingham Palace, and the Houses of Parliament. We’ll probably also take the Chunnel to Paris for either a day or spend the night and come back the next day. IT. WILL. BE. AWESOME.

Okay, well, tomorrow is Friday, which means I will have to find something cool to download from You Tube to watch for our “Viral Video Viernes” treat. We could watch Part II of Marcel the Shell, but I found a few other things that have piqued** my interest . . . so we’ll see!

I’m also going to bed early tonight. I’ve stayed up until 11 or later each night this week, which is brutal when one gets up at 5 each morning. I usually need about 9 hours of sleep to feel great, and I am definitely not getting it. At least I can make up some sleep on our three day weekend. That will be NICE.

So enough about me . . . what random thoughts have been floating around in your head? 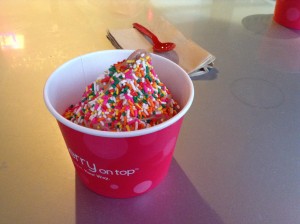 I don’t know why, but I love rainbow sprinkles. I think it was when I was in junior high that my fascination with rainbow sprinkles began. Frozen yogurt shops were popular then, just like they are now. When we had free time on a Saturday, of if there was a short day like my students have periodically, we would all walk to the yogurt shop at East Anaheim Center. I always got rainbow sprinkles on my yogurt. To me, they seemed like little frostings. (Even my best friend remembers me — and reminds me on occasion — that I told her they taste like mini frostings.)

When I got older, I happened to work in a location where I could periodically help myself to frozen yogurt. The coolest thing was that I could put as many of the rainbow sprinkles toppings onto my yogurt as I pleased. Needless to say, my yogurt was swimming in sprinkles.

Even today I love rainbow sprinkles.

I love that you can go to self-serve places like Yogurtland and still put on as many rainbow sprinkles as you like. My favorite yogurt place is Golden Spoon, but I don’t like that one cannot choose how many toppings are put on a serving. AND . . . one time I went there . . . and . . . they . . . didn’t . . . have . . . the . . . right . . . kind . . . of . . . sprinkles! There are rainbow sprinkles that are “crunchier” than the other kind of rainbow sprinkles. They are deceptively similar to the ones that are available to put on yogurt, but those are not the right kinds!

What is YOUR favorite topping? 🙂