So getting to Rome was a lot easier (in some respects) than getting to Paris, which was the first leg of my European journey a few years back. My traveling partner this year is Thing 2.

This time, we opted to get to LAX to catch our flight via the Disneyland Resort Express bus. Mr. Rovira dropped us off at the Disneyland Hotel; this was easier for him, too, because it meant that he, Thing 1, and Mr. T wouldn’t need to brave afternoon/early evening LA traffic on the way home after dropping us off. Our flight was due to leave Los Angeles at 18:05 on 05 June.

We breezed through security at the airport and then waited for a while until it was time to start boarding our plane. The first leg of our journey to Rome had us traveling into London’s Heathrow airport. We would have a two-hour layover, and then arrive in Rome right around 18:00 on 06 June. Our flight to London was uneventful. A huge boon for me was that I slept for most of the flight. After our initial drink/meal service, I tried to cuddle in to my seat to try to sleep — and I did. That usually never happens. Thankfully, that allowed a ten and a half hour flight pass rather more quickly than I was expecting it to. Meanwhile, Thing 2 was enchanted by the movies-on-demand at our seat, so she spent her time watching movies instead of sleeping. Bad move on her part, I think. She ended up with a no-sleep headache later on.

We landed in Heathrow’s Terminal 3 and had to make our way to Terminal 5. That took longer than expected, and once we got to Terminal 5, we needed to pass through security again. There was an initial problem reading my ticket to even get through to be screened by machines. Then, as we were taking off our shoes and putting our backpacks in buckets to pass through x-ray, I forgot to take my phone out of my pocket. That caused me to beep as I went through. A pat-down found my phone, so they took that out to put through the x-ray machine separately. Meanwhile, Thing 2’s backpack had a “suspicious” sharp object in it, and so it got pulled out for personal searching. Apparently, as she was cleaning it out after school’s end, she forgot to go into the compartment that had scissors and glue in it, so these got pulled out and confiscated (which was no biggie, since who needs scissors on vacation?). Now we were getting really nervous because we had only 20 minutes until our flight to Rome was due to depart. The security woman was very kind, and we said we were sorry for causing unnecessary problems . . . And it kinda made me wonder about security in LAX if we were able to get the backpack through there with scissors. Hmm.

So we stuffed the contents back in the backpack and began running at top speed down to our gate. Passports and boarding passes in hand, I then realized, “OH NO! My PHONE!” It was still back at security. I started running back up to security, not knowing the nice lady who searched through Thing 2’s backpack was on her way down to us with the phone. So, back I ran to the gate, where she was waiting with my phone. We got on to the plan . . . Maybe we were the last to board? It was a little stressful. But, we made it! We were sitting next to a nice woman from the Bay Area who also was traveling to Rome for the first time on vacation; she was meeting friends here. She had missed her previous connecting flight to Rome because her other flight from Oakland was late coming in. So all three of us were glad we were Rome-bound.

Arriving in Rome, we got through customs easily and got our passports stamped. The customs officers were really cool; one was listening to (Italian?) punk music, and they were sort of nodding their heads along with the music as they stamped us and welcomed us to Italy. We easily caught the Leonardo Express train 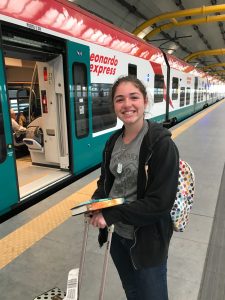 to Roma Termini (the station nearest our hotel, and one of Rome’s main train stations). From there we got a taxi to our hotel. I’m sure that our taxi driver took us on a longer route than needed to get to our hotel, but it was nice to see some of Rome by car – including our first view of the Colosseum (squeee!)

We checked in without problem. Our concierge, Roberto, was great. I took a quick shower to get rid of travel grime, and we went out for a quick reconnoiter of our surroundings. We ate a quick pizza on-the-go that was delicious, and made our way to an awesome gelato 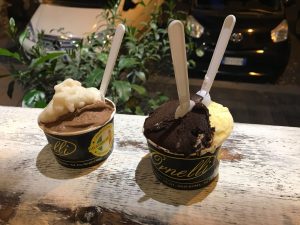 place for a sweet snack. We also stopped by a pharmacy to pick up some ibuprofen for my ankle. (I forgot to pack the Advil!) Roberto was even kind enough to give me a special pack in which to put ice so I could ice it down. A bit of reading up and reviewing the calendar for the day ahead is how I ended my night. One of the things that we had planned was to visit the Trevi fountain, but that will just have to be done another day, as it was getting dark, and I didn’t want to be out after dark on our own.

(Unfortunately, a bit of jet lag caught up with both Thing 2 and I, so we didn’t sleep past around 3:00 am. We gave it the good ol college try to get more sleep, but eventually called it a night and started getting up. This allowed us to use Yelp to try to find a good place for breakfast and research how to get there on public transit. I also got to write this blog post. 😀)