So I have been a sorry excuse for a blogger lately. I just haven’t made the time to sit down to write anything. It isn’t like I don’t have things floating about in my head to write about; I still have to finish writing about London! But, as I am going to try to set a good example for blogging students, here’s a few random thoughts that have been floating around in my head.

Random Thought No. 1: So normally Mr. Rovira and I don’t take the kids with us when we go out for Japanese. Thing 1 is an especially picky eater, and Thing 2 isn’t much better. Mr. T doesn’t eat much of anything at all, but certainly not sushi or miso soup. Of the three younger units, Thing 2 is definitely the most culinarily adventurous, but it just seems like taking them out to eat Japanese with us is a waste of time (and money). So we save our visits to Kaori for when Meema and Papa offer to babysit. But Friday night Mr. Rovira and I just had a craving for sushi that was too strong. Thing 1 was off for the evening with a friend, so we were left with Thing 2 and Mr. T, and we said, “Why not?” It was delicious, as usual, but I was reminded when I was there about how awesome these things are: 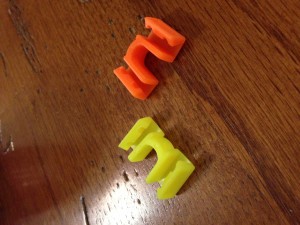 You’re probably wondering what these are. They are for people like me who have not mastered the art of eating with chopsticks. I am very uncoordinated like that. So they help me “cheat” and eat sushi like everyone else in the restaurant. They go at the end of the chopsticks. They are awesome. Since Thing 2 tried some actual sushi this time (eel), we allowed her to get a pair too. She’s younger though, so there’s hope for her yet that she will learn to hold and use a pair properly.

Random Thought No. 2: I have been craving Diet Coke for the past week and a half. I gave it up on June 9, so it is completely out of my system. However, we’re coming to the end of the quarter at school, so I am feeling especially stressed. Perhaps that is why I am craving it. In any case, I am resolved not to give in at all. Overseas I discovered San Pellegrino flavored waters. I drank a lot of the “arancia” flavor, but found the “melograno e arancia” flavor at Costco a few weeks back. It’s delicious, and I highly recommend it! 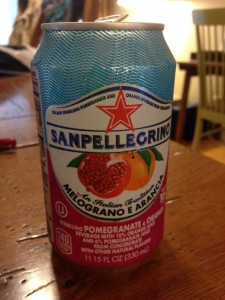 When I get sick of drinking just plain water, I chug down one of these.

Random Thought No. 3: What’s on your current favorite playlist? I’ve downloaded some new songs to put on one of mine. I downloaded “Best Friend” by Foster the People, “Do I Wanna Know?” by Arctic Monkeys, “Ways to Go” by Grouplove, and “Connection” by Elastica. The Elastica title is somewhat of an old one, having come out in 1995. I’m also planning on downloading and adding to my library “Regret” by New Order. That came out in 1993. I have an external hard drive at home (1 Tb) full of music, but not all of it have I downloaded and actually added to my computer library. But I was reminded of how awesome a song “Regret” was, so I’ll add it and listen to it. On iTunes Radio I’ve been listening to the ’80s Alternative station, which is THE. BEST. STATION. EVER. The ’80s rule. (No Lionel Ritchie or stuff like that though!)

Random Thought No. 4: My washing machine is REALLY loud. I’m trying to listen to music as I type this up, and it is so loud I cannot hear anything. (We have an inside washer and dryer, not out in the garage or anything.) The spin cycle is coming to an end, so hopefully that will be the end of it . . . until I start another load.

Random Thought No. 5: I haven’t been able to go running in almost two weeks now. I pushed it too hard and gave myself shin splints. (sigh) They are very painful. I usually leave to go running at 5:15 in the morning, and so I have to say that I am enjoying getting ready in the morning at a more sedate pace. But I don’t feel as mentally sharp as I do after I go running. I feel like a slug. I hope my shins heal up soon. Mrs. Ortiz, whom I asked for advice about my shins — since she runs marathons and knows about all things running — said that it probably occurred because I tried to increase my mileage too much in one week. That, and my shoes may be faulty. Every other day or so I try jogging a few steps, but so far it has been painful so . . . I’ll wait.