This was a day long trip. We had to arrive at our departure point at 7:30 in the morning. Luckily, it was a quick two-stop trip on the Metro and a short walk. The day was cool as we started out, and our bus was so air conditioned that I was actually cold.

Pompeii is just outside Naples, and it was nice to get out of the city to get a glimpse of the Italian countryside between Rome and Naples. Alone the way, nestled in one of the hills we got a glimpse of Monte Cassino, site of a monastery and some fighting during World War II. We also saw a famous palace (which I forgot the name of because I didn’t write it down). Both Thing 2 and I got a bit of sleep on the ride. After about an hour and a half, we stopped at an Italian rest stop. The unfortunate thing was that a bunch of other tour busses stopped at the same rest stop, so a mass of humanity was at the café inside trying to purchase small pastries, coffee, and use the restroom. Thing 2 and I bypassed the restroom in favor of sweets (since we hadn’t had breakfast before we got on the bus). We scarfed down our food, got back on the bus, and within an hour, we were in Naples.

Naples is . . . not so pretty. I found it rather trashy looking, actually. It is made up of lots and lots of apartment buildings of about six to seven stories each. In nearly every window, washing was hanging out to dry in the sun. It is also very hilly. Our driver, Mario, navigated us through the scenic, hilly part of town to show us the coast. We stopped to take in a very picturesque view of the Mediterranean with Mt. Vesuvius in the distant background. 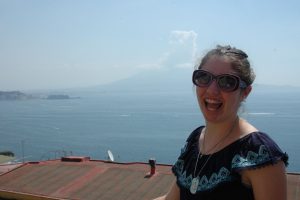 Of course, I took Thing 2’s picture there. We also stopped for lunch in Naples before moving on to explore Pompeii in the afternoon heat. Our lunch consisted of a penne pasta in a red sauce (first course) and then some thin steak with mozzarella cheese (second course). [Italian menus follow the same pattern in that “antipasto” is listed, then first courses (which is pastas), then second courses (meats, chicken, and fish dishes), then sides like broccoli or potatoes, then desserts.] In Naples, we were also joined by the man who would be narrating our tour through Pompeii. He is currently a working archaeologist and has helped to excavate a lot of Pompeii with his students. He has been working around Pompeii for nearly twenty years, so he totally knew his stuff. [That has been the best thing about our tours: they’ve all been narrated by working art historians and archaeologists.]

We lucked out in that Pompeii wasn’t as hot as I expected it to be, largely because we were near the coast and there was a nice breeze. It was dirty and dusty, though, and I felt pretty grimy by the end of the day. It was pretty thrilling to walk through streets and see the original paving stones — some even with the ruts of Roman cartwheels still in them. 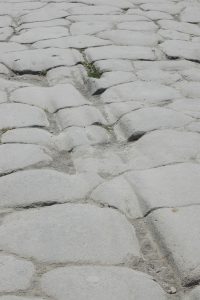 We also saw some original Roman lead piping leading in and out of some of the houses and businesses. Our guide (Fabiano) told us how to distinguish between the ruins of a business versus a home in Pompeii. Houses had marble entrance stones; businesses had regular grey sandstone entrances, with grooves in the stone where a shop door would have once fit. We got see a house of prostitution, and a bakery. (Archaeologists have excavated 25 houses of prostitution and 44 bakeries. The house of prostitution even still had a few of the racy frescoes still on the wall. It also had a toilet.) We were able to also see the “House of the Fawn,” named because of the fawn statue in the entryway of the home. It was the house of a wealthy citizen because it had six rooms, two atria, a garden, plus a garden after that garden, its own kitchen, and a huge entryway. It even had a Latin mosaic greeting in place of a modern-day doormat, which translated to “Welcome.” In another doorway we saw the very famous mosaic floor depicting a dog and the words “cave canum” which means, “Beware of dog!” Pompeii also had a very preserved Roman bath, complete with steam room, original mosaic floors, and frescoes. We saw the ruins of temples and other buildings in their forum, or public area. There were just so many amazing things to see. Our last stop before Fabiano left us and we could explore more on our own was the “storeroom” where remains of artifacts that have been salvaged are kept. We saw the “bodies” of a dog, a slave, a teenager, and a toddler. Additionally, we saw amphora and other tools that archaeologists found and made casts of as they have worked. 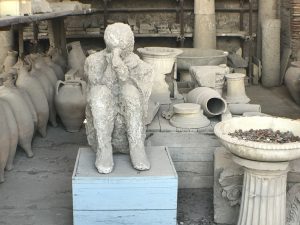 We had about an hour to walk around on our own, visit the bookstore, and do a bit of shopping before it was time to hop back on the bus and head back to Rome. Thing 2 and I poked around a bit at a few more things, but the heat of the day had caught up to us . . . like I said, it was cooler than I thought it would be, considering we were near the ocean, but still warm after one has been walking out in the sun for hours. Visiting the bookstore (air conditioned!) provided a bit of a relief. I got some books, and then we visited a shop across the street from the entrance to get a few more souvenirs. It was a welcome relief to get back on the bus (with air conditioning!) and have a relaxing ride back to Rome. It was also nice that I wasn’t on my feet quite as much as I had been in the days previous. My ankle wasn’t as swollen at the end of the day today as it has been in past days.

Thing 2 and I needed to have a good meal before bed, so we headed off to a restaurant that wasn’t too far away from our hotel and one that was rated well on Yelp. I got exactly what I wanted: delicious pasta in cream sauce with Italian bacon and mushrooms. 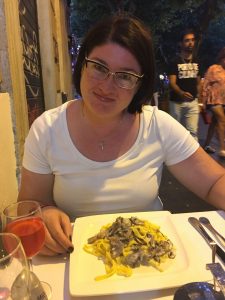 I drank an entire liter of frizzante water. I slept so well with a full belly and all tired out. 🙂 The good news: We could sleep in the next morning . . . a little.

For an album of photos from our day today, please click here.